Before I say anything, I have to give a gigantic THANK YOU to my boss, Ms. Amy Root!!! If it wasn’t for her radicalness, I would have not been able to catch the whole evening whilst looking shockingly presentable.  There’s pictures of me floating around somewhere.  🙂

Friday night,  Teatro Vision held a little fundraiser to help cover the cost of sending two Teatro Vision representatives to the National Theater Communications Group Conference.  Typically, this conference is held in the East Coast, but this year, it’s happening in the City of Angeles.  The TCG is focused on how to keep the Arts alive and changing with the times.  On their site, they say that the theme of the conference is “What if…” I think it’s a brilliant theme and I loved some of the questions they posed on the page.  You should check it out!

How could I not want to help a local company, that has given me so many opportunities, travel to something this important?  With this in mind, I accepted the invitation to the get together and was granted permission by Elisa to take photographs of the night.  Since I didn’t want to distract the performers, I didn’t use the flash, so there is a kind of 70’s looking graininess to them that I kind of like.  But I really did want some clear shots especially for the dancers. 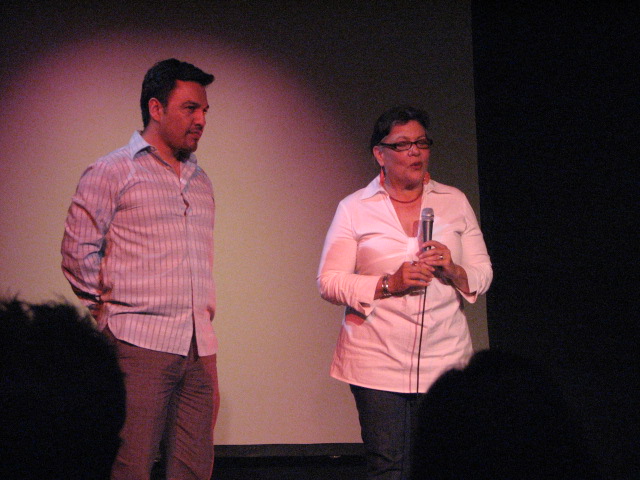 The night’s hosts Rodrigo and Elisa made everyone feel welcome and thanked the crowd many times over.  Rodrigo was the emcee and he was incredibly charming behind the mic.  He spoke of the hope that this event may be something that Teatro will host every few months to have a chance to reconnect with each other.  It was a small gathering, but he said we were all familia.  That’s one of the great things about Teatro Vision that keeps me wanting to go back again and again.

First up to perform was Cristal Gonzalez.  She performed a monologue titled Hero & Saints.  This multi-character scene began with an Erin Brockovich type reporter bringing to light the toxic water supply in a California city and the citizens struggle with governmental assistance.  The reporter shifts into a gossipy neighbor, then into a mother and grandmother of a child dying from the water.  It was a lovely piece that makes me want to know the rest of the story.
Next up was Sarita Ocon. 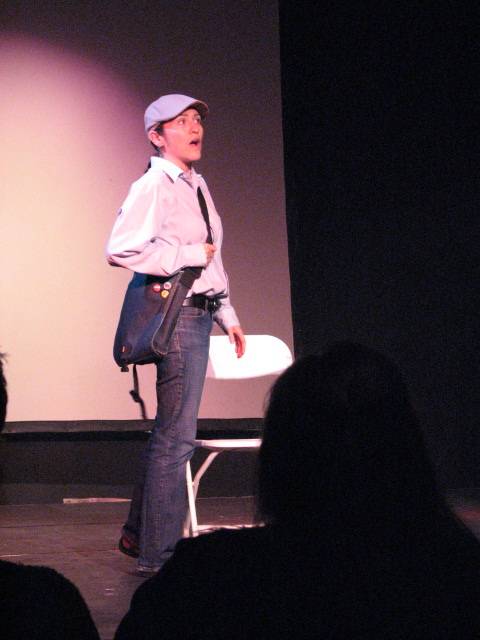 Sarita performed an original piece called “Compromise.”  This performance was also uses a monologue from the play “References to Salvador Dali Make Me Hot.”  While speaking with her, I found out that it’s an exaggeration on an experience that happened to her at an audition once.  She slates as one would at any audition, then begins to launch into her monologue.  She is repeatedly interrupted by the director who is constantly trying to make her more feminine or more “Latina” I cannot explain how fascinating this was to watch.  I just knew that I was watching someone incredibly special.  I mean, I have NEVER paid so much attention to how someone rolls up their sleeves.  I was completely enthralled and did not ever want it to end.  Her transformations were marvelous.  You could see, after she was “directed,” she took time to change her attack and she showed you without a word and without making it a long drawn out thing. 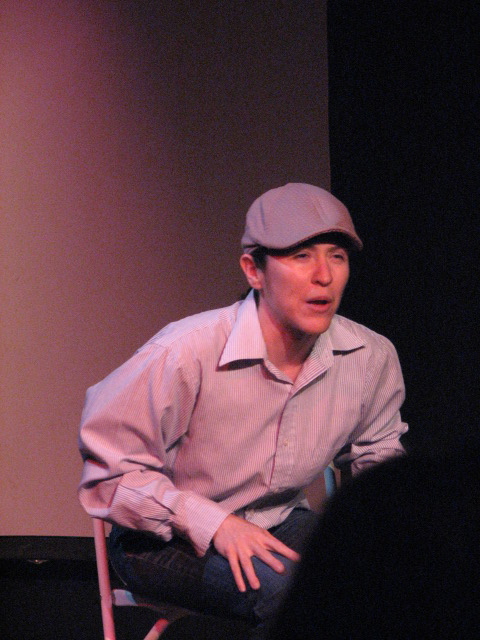 Not only was her performance mesmerizing, but her story was so full and complete that it wasn’t until after I got home that I realized the song that lead into her piece was a perfect choice.  I don’t know if she requested to be brought onto the stage to the tune of “I’m Your Puppet” by James and Bobby Purify, but it fit with the idea that she had to do the things that the director wanted. 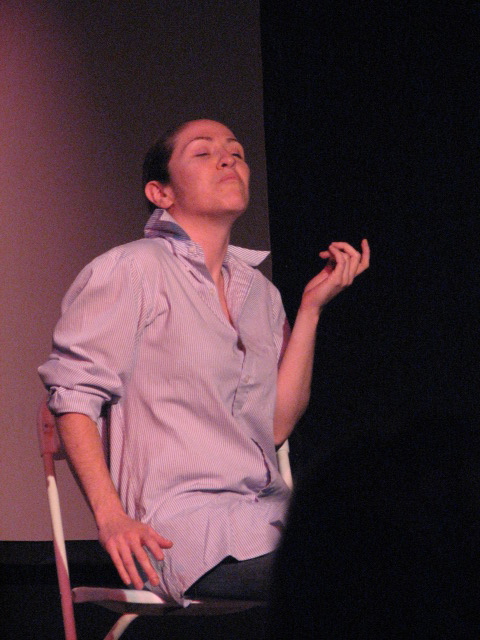 By the time she was done, she was the complete opposite than what she started and was so much more intense that when she left the stage, the room exploded with applause.  Truly an amazing and gifted artist, and I would LOVE to work with her.
The next performer was a shock to me for two reasons. The first was that this is a Latino function and there’s so much machismo in this culture that I didn’t expect it.  The second was the audience reaction.  I feel bad because I couldn’t quite catch the name, but we were treated to a fun three song set of a drag performance.

Her heels must have been at least 3.5 inches so I don’t know how she did all that she did in them.  Props to her for that alone!!  She worked the crowd and they loved it.  I wish I could tell you the songs she used, but they were in spanish and I was just lost.  So I focused on the beat and the dancing.  She was all kindsa sassy!  So fun though. 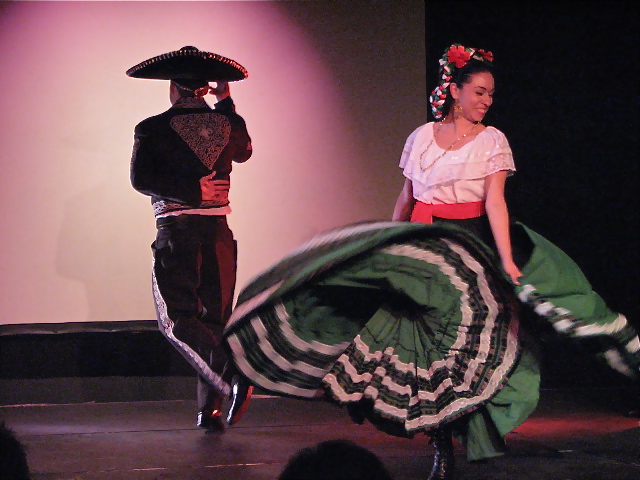 Closing out the show would be my first folklorico dances since I truly began to appreciate dance.  My friend the beautiful Anees Guillen and her dance partner Alex Morales delighted the crowd with a three song set as well.  It was stunning.  I couldn’t help but to be drawn to the way she would work that dress!! It just moved to well.  They had asked me to make these little calls or yelps to cheer them on, so when I tried it, I felt like I wasn’t doing it right.  I didn’t do them very loud, but I tried.

While it was the end of the performances, the night was still young, so I hung around and danced my first line dance! When I told Perry and one of my other friends this, their reaction was the same: Me: I danced my first line dance.  Them: Ugh!  Me: It was to Billy Ray Cyrus’ “Achy-Breaky Heart.  Them: UUgh!  Me: In Spanish.  Them:  UUUGH!!
But it was super fun.  I got a little sweaty thanks to the tunes of our playlist iDJ, Hugo, who was also very active in getting everyone into the line.  I think in all there were four songs that had a line dance type of movement to them.

In the MACLA gallery, I was greeted by the works of Elizabeth Gomez.  She works with mixed media to create images of nature/animals that are adapting to human habitats mixed with religious iconography.  One of my favorites called “Crow”  is a large beautiful piece of blues with little faux flowers that looked to be painted to match the canvas settings.  It’s a charming and lovely piece that would look perfect in my blues filled living room.
One of her other pieces was of a mountain lion that had been shot by Animal Control, I believe it was.  I don’t know if you remember the mountain lion that was found in the backyard of a Redwood City home and was shot rather than captured and released that happened a while back.  Thanks to, for lack of a properly respectful term, Ms. Gomez’s love of nature, her sorrow for this pointless killing inspired her to create a stuffed toy replica of the lion and underneath is scarlet red fabric. There are three deep indentations with that same scarlet fabric sewn into them with ribbons of it flowing out the “wounds.”  I am sure that my likemindedness regarding nature and destroying other creatures homes for humanity’s benefit allowed me to connect with this image and made me feel what I guess is the same sorrow that she felt.  The hanging flowers over the body offer a touching element representing that love of nature.   I was so caught up in looking at the lion and the other works that Ms. Gomez created that I didn’t even realize the doors opened and people were filing in.
All in all, it was a wonderful night! I got to hang out with my buddies Hugo,  Rodrigo, Anees,  and Elisa.  I got to meet some cool new people like Alex and Sarita.  And I was blessed with inspiration.  What more could I hope for?

2 thoughts on “There I sat in rapt attention…”