To this day ever since seeing the live theatre event that is Les Miserables, once the faint singing of “Do you hear the people sing/Lost in the valley of the night/It is the music of the people/Who are climbing to the light”  I feel the sting of tears flood my eyes and a lump forms in my throat and my ears start to burn.  Then the music begins to swell and the voices sing out louder and louder taking me over the wall and into the revolution with them.

Seeing this masterpiece of a show on a stage has such power that there, simply put, isn’t a way to match it, unless it’s to film a live production of it.  You know, like they did with RENT.

I try to pretend that the movie with the original cast was never made.  Its just that bad.

This brings me to my point.  Watching the “midnight” showing of Les Mis last night with my friend, Tressa and with Perry, left me feeling like I wasted my money.   I love the show, I really really do.  So when people try to Hollywoodize a Broadway show, I know there will be differences.  What I don’t understand is why someone would take this show which has worked as written for decades and rewrite some lyrics or switch them or cut a song.  Is it because movie audiences just wouldn’t get it?  It’s possible.  I mean the characters of the Thenardiers (played by Sacha Baron Cohen and Helena Bonham Carter) were blown up so over the top it was terrible.  But they were bastard versions of the characters so that typical movie audiences would be okay with watching a musical.  Yes, I know its a downer of a show and they are the light moments, but making them clowns isn’t necessary to showing the funny in their behaviors. I think that was a horrible choice for the casting director (Nina Gold).  They may as well have put in Adam Sandler in for Cohen.   I couldn’t wait for them to get the eff off the screen.

Speaking of horrible choices, Ms. Gold, what were you thinking with Russell Crowe?  No, really.  I would love to know.  I understand that simply as an actor he looks and can play the role of a hard-nosed inspector in France in the 1800’s.  But his singing was just atrocious.  I felt bad for him.  And myself.  Did you have him actually sing “Stars” at the audition?  Wow.  His rendition gave me nightsweats!

I know I am being a little mean to you Ms. Gold, so here’s some good to go with the bad… 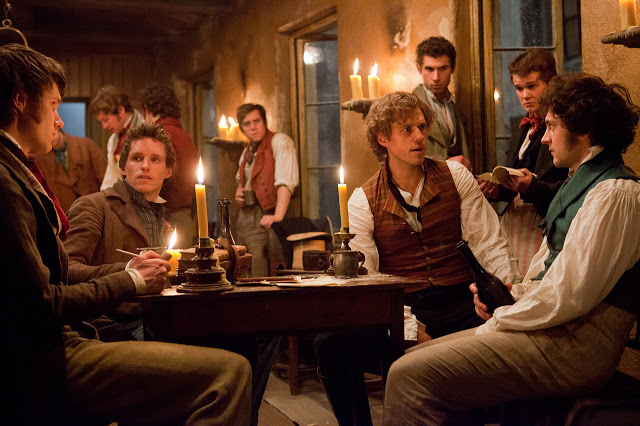 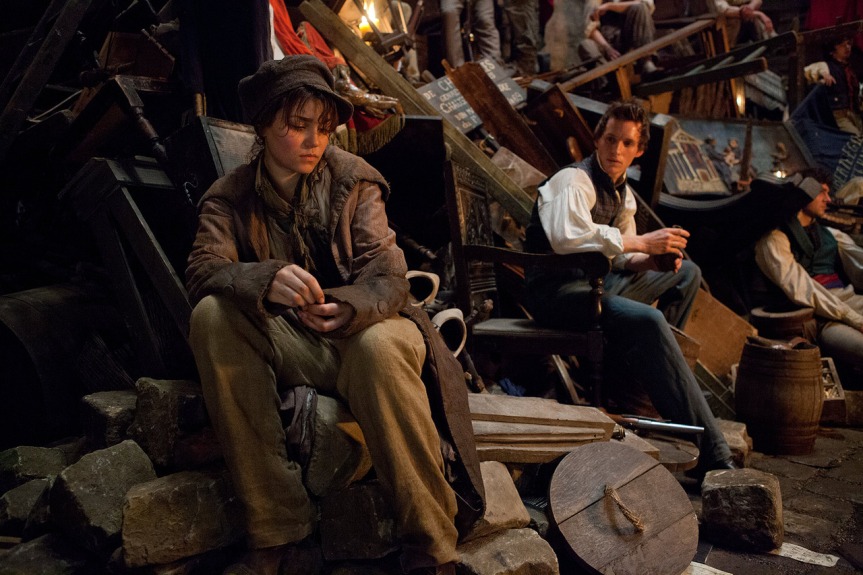 Samantha Barks, Eddie Redmayne, Daniel Huttlestone, Anne Hathaway and Aaron Tveit were great.  I could close my eyes and see all of them as part of a stage production.  Of course Ms. Barks has already been (see the clip below) and Mr. Tveit has been on Broadway as well (Catch Me If You Can).  As the lovelorn Eponine, Ms. Barks, my favorite part of the movie, is heartbreaking but never defeatist which makes me root for her all the more.  Huttlestone as Gavroche was perfection as the feisty little revolutionary.  I loved the moment he sings “Think you’re poor/Think you’re free/ Follow me/ Follow me…” He is standing in the window of a carriage singing down to an aristocrat with one foot on the ledge in a position of power.  It is a great shot.  One of the few that I enjoyed in the movie.  Marius’ epic “Empty Chairs At Empty Tables” was for me the showstopper of the movie and Redmayne was mesmerizing.  Anne Hathaway made Fantine strong and delicate but such a fighter that she is worthy of the Golden Globe nomination.  Mr. Tveit was on point for this role! He was my other favorite actor in this movie.

Samantha Barks sings “On My Own”

Oh, speaking of Golden Globes, Mr. Hugh Jackman, while doing a very very good job in the movie was kinda weirdly uninteresting at times.  Don’t get me wrong, I love me some Hugh, but there were moments where I just had to scratch my head and say “WTF?”  For example, during the new “song” (it doesn’t really fit in the show, style wise, I feel) Valjean is supposed to be stroking Cosette’s hair while she is sleeping on his lap.  First, his hand is held in an awkward position, and then when you really watch he’s not even touching her hair.  To make matters worse, the director cuts to a close up and shows him tenderly (or as I like to say fakely) caressing her hair.  Then during his rendition of “Bring Him Home,” he starts almost in a belting voice which leaves nowhere for the song to build to.  I just wanted to close my eyes and wish for Colm Wilkinson to take over after a few lines.

AND I ALMOST FORGOT TO MENTION: It was so awesome to see Colm Wilkinson (The original Jean Valjean) as the Priest who gives Valjean the silver to remake his life.   It just brought the biggest smile on my face.

One thing that the movie can do better than the musical was show in greater detail the battle scene.  It is powerful and heartbreaking.

The other thing that bothered me was the lack of new angles and shots when it came time to sing the songs. Each solo was filmed head on with only one person in the shot. Even the duets are filmed in this way.  If I remember correctly, all the songs were sung as they were being filmed live, so I can understand why it was filmed like this. But for a movie that is 97% sung it gets old fast.

I will hold firm that the best musical converted to a movie is Chicago.  I don’t think Les Mis is an entirely lost cause, but I think I should have waited for a matinee to shell out some dough to see this “show.”

It is a pretty good movie, just not as amazing as I was hoping.

I can only give Les Miserables 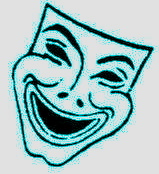 Two smiling actors.  Maybe I will upgrade review when the dvd comes out.

One thought on “Les Mis Left Me Le Meh….”

I bet you can't guess where I am right now!!??
Hello you beautiful people!
The #hauntedhouse collection is GROWING!! This one of so cute. It is of a costume party. #spookyseason👻 #themostwonderfultimeoftheyear🎃
I am starting to get ready for #spookyseason👻
Inspired by @paulaabdul's post, today's #ShamelessCDSaturday is her #1 sophomore album released in 1991 #Spellbound.
Well, let's how this is...
I am SOOOO in love with this phalaenopsis orchid arrangement with white birch and artichoke accents! 😍😍😍 #shepretty
For today's #ShamelessCDSaturday submission, I am grooving to @cultureclubofficial's incredible sophomore release #ColourByNumbers! This is the original version not the remaster that has near 20 aditional minutes of playing time. This is *chef's 💋* a beautiful journey of #popmusicbliss.
Hey friends! Last week was freakin nuts! With this heat, I completely forgot to post my #ShamelessCDSaturday submission. As pictured, from 1991 and 1985, #straightouttahellskitchen (which is now 30 YO😯) and #LisaLisaAndCultJamWithFullForce, I served up a double dose of the amazing @lisalisall77! SOHK was such a favorite of mine and I love the contrast between these 2 albums because you hear the growth in maturity of the writing and vocal execution. In the self titled album the vocals were great. Strong and yet pretty with flashes of belting; that sort of innocent girl with a lil "don't mess with me", if you know what I mean. In Kitchen, so many more songs with some great belting phrases and sustained power notes that I love to sing along with. Needless to say, I was basically doing that #celinedionchallenge to these songs, at least while the weather permitted.
#happymonday😊 to all of you gorgeous wonderful people! May you slay your day, conquer the week and celebrate your wins when can. #goodmorningstarshine #smelltheroses
Lazy Sundays make for a well rested Monday. LOL
For today's #ShamelessCDSaturday, I submit @bbmakofficial's U.S. debut album #SoonerOrLater. Released in 2000, the biggest hit on the album was #BackHere. I am pretty certain they released #GhostOfYouAndMe as a single. I absolutely love this entire album. It is so full of beautiful harmonies and pop bliss! My favorite track is this short gorgeous gem called #Always, which is a mere handful of words, but hits so many emotions. To me, it is full of love, hearbreak, loss and hope.