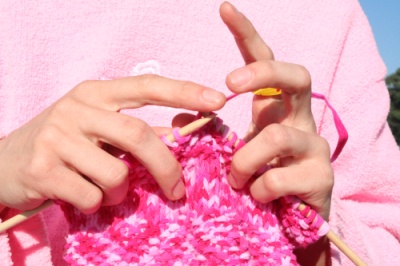 As most of you know, I am currently out of the professional job market.  Bummer,  I know.  But I keep myself busy with my love of theatre and all things creative.  Today is World Wide Knit in Public Day, and as far as I can tell, there aren’t too many things happening in the Stitchosphere.  At least not like last year when all the yarn shops were offering…something. So after a bit of research, I come to find out it’s supposed to be the second Saturday in June, but no one really did anything major in the Bay Area.  AND therefore, today is NOT WWKiP Day.  Thumbs down!!   So, I am so sad.  I was really looking forward to it.

Last year, I was in as many different places as possible.  I started off at Green Planet Yarn and hung out there.  Then, I hopped on public transportation and made my way to downtown San Jose to a festival that was happening in Discovery Meadows Park and knit there.  Then back on the bus, each time I got the most bizarre looks from people.  It was almost as though I was some sort of freak.  I kept my needles clickety clacking as I walked home just for the sake of being seen by the passing cars.

So this year my pointy sticks have several unfinished projects, that will stay unfinished because at the moment, I am reaching the deadline to be off book for Shakespeare 3 Ways.  I’ll pick up the reversable scarf I am making for my sister, but I’ll only do a row or two then put it back down.

Speaking of S3W, we were interviewed for a local television show called Artbeat. I totally made a mess of that!  Hopefully they will edit me out.  The fellow that conducts the interviews was nice, but he made me wonder, “Oh, gad.  Do I come off like this?”  I hope not.  So I may rethink how future podcasts are done.

And, no, that is not me in the picture above.

What are you working on? Drop me a line, I’ll tell my people, and they’ll tell their people, who will tell…well you get the picture.