I am not big on self-promotion.  Call me shy.  So I’ve never looked for accomplishments.  I often review with a combination of regret and what did I learn.

In January, I learned of a cool little indie museum called Empire Seven Studios in San Jose.  My friend Kyle had a show there.

I loved that his pieces were filled with whimsy.  The volume of pieces that were up in the studio was insane.  There had to have been easily over a hundred of them. I scored two works and love them both.  The one that is officially mine looks like a bunch of tiny blotches that look like a body with arms and legs painted in.  The way that it’s done makes it look like it’s a dancer.  The other belongs to Perry and it looks like it could have been part of a Dr. Seuss story if you aren’t close enough.  I regret not being able to by more of these cool works.

What I love about Empire Seven is that there isn’t any pretense.  As you can see, the walls are decorated (I don’t know for certain if it’s by the Artists or not, but I think it is.) and it reminds me of how I decorated my first apartments. When I walk into other museums, the stark white walls just seem so authoritative.  I know it’s so you can focus on the art, but I feel like I am supposed to behave as though I am  in a library with whispered tones and a look that says ” I am deep in thought”on my face. This place says, come and check out what some local people have created or just come and chat with some cool cats.

In February, I began working on my second project with Teatro Vision.  It’s a wonderful company, and it provided me with a nice change of pace from musicals or comedies.  My love of this company is so much more profound than I remember from my first experience with them.  I learned to not only question everything, including my beliefs  (are they really mine or what I was taught?) and ask questions.  Through them, whether by osmosis or a new habit, I became more informed about the events of the world.  That is something that isn’t really talked about in American news.  To pay attention to all the things that are happening in the world, not just what the big cable networks are telling you is news.  Find independent sources of news like KPFA which has MANY links from which to check out.

This second time around, made me feel more connected with my heritage. I know it sounds like I am being outrageous for the sake of it, but let me clarify.  Even after working on “Hero” with Teatro, I was still too self conscious to speak Spanish words.  I remember having to learn some Spanish in 1st grade and some of the kids would make fun of us on the playground. I don’t even know why I was in that class.  I spoke perfectly fluent English with complex sentences.  Maybe it was the brown skin. So, I have made it a point for myself to not be what people believe I am. I didn’t bother learning any more Spanish after that school year, and in high school I learned French.

With this cast being 3 times bigger than my first experience, I was surrounded by all these wonderful amazing incredible people that were an honor to work with. And I began to learn some Spanish. Little by little, I hear a word here and there and I try to remember what it means.  But merely speaking a language isn’t all that I am talking about. I am finally beginning to see the beauty in the culture itself and learning about it’s past.

In March, I decided that I was going to join the AIDS Lifecycle.  On a whim, I decided this. So when I look into the details, I find that registration has been closed for like 2 months! I was a little disheartened, but then I figured, well, hell.  I can ride next year!  So I requested to be added to their early registration alert.  So any day now, I will be expecting an email saying it’s time to sign up.  So while I may regret not being able to ride last year, I am hoping that I get everything ready and train for it this year!

Also in March, we celebrated our 15 year anniversary!  There were no bells. There were no drinks.  There was only, wake up and go to work to pay taxes and rent and bills.  And there still are no Equal Rights….

I didn’t have too many things to regret the first part of the year, thankfully.  Well, kids, Quarter #1 is over.  What did you learn during the first three months of 2011?  More importantly, what do you regret and how will you make sure not to repeat it in 2012?  Comments are always welcome.

When I was in 8th grade, the AIDS epidemic was still a major topic. Nearly 10 years that it had been announced as a major killer of so many people, schools began to talk about safe sex with their sex education lessons.  I don’t know how many schools had this, but I was lucky enough that mine did.  While I don’t actually recall the name of the program, I spent most of my 8th Grade year talking to other students about safer sex.  The program was saying that there was really no such thing as “safe” sex, because there’s always a risk.  I even got to go to a conference with other students.

The Aids LifeCycle is a 540+ mile bike ride that begins in San Francisco and ends in L.A.  It’s all done in 7 days.  It’s all along the coast, so the ride should be beautiful, provided the weather is good.  See for yourself what the route is like. 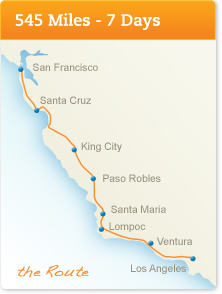 Now that I finally have a bike, I am so excited to finally do this.  I supposed I could have asked around to borrow a bike, but I know that I already am going to have to ask around for a tent.  So I just want to give you all a heads up that I will soon be hitting all of you up for donations for the ride.  BUT here’s the good news: It’s not until next year.  Next June, the coast will be MINE!!! Muahahahahaha!!!

I really wanted to do this year’s ride, but I was just 2 months too late.  Shucks.  It’d be nice to finally do more than to just give a few bucks here and there.

Just in case your wondering what it’ll be like, check out the documentary that was made a few years back about a group of riders in one of the past events.  You can find it on Netflix!