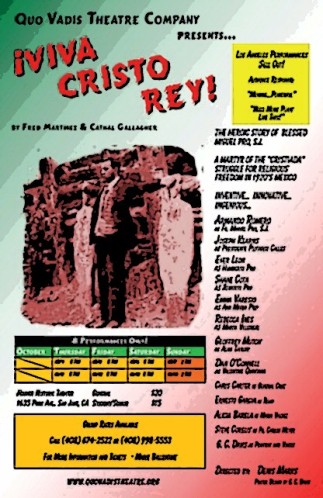 The link above is the interview that followed the show.  Click on the triangle (the symbol for play) to begin.  It’s a heavy subject and the actors appeared to be physically taxed, and I don’t blame them.  Hats off to the cast and crew!

You can buy tix by calling the number on the flyer above.  Performances are at the Hoover Theatre on Park Avenue in San Jose.  Check out the flyer above to get specific info.

It is a moving story based on true events. The story revolves around Blessed Miguel Pro, S.J.,  during the 1920’s in Mexico during a “revolutionary” period.  During this time the government tried to entirely wipe out religious faith and worship.  Punishment usually ended in death. The idea behind this “revolution” was that religion was holding back the progress of the society with it’s antiquated beliefs and rules.  Father Pro, against advise and numerous requests felt it was his duty to carry out worship without fear of the risk he was taking.  He used disguises to get things to people who needed it or to those that needed to confess.  It truly pays homage to the old adage “Where there’s a will, there’s a way.”

Thank you to Marie Ballentine for the invite to see the show and talk to the cast after the show on Saturday night.

What I love about this company is that they always look for the stories that haven’t been told about real people doing heroic deeds.  The focus is Catholic based, but I love hearing stories of people helping others no matter what the background is.  With stand out performances by Alicia Barela, Chris Carter, and Shane Cota, this show is inspiring and informative.

The dialogue of the script is a little choppy in places and there are a couple directorial choices that are clunky, but it is a great story.

This episode features music from past Tony winners for “Best Musical” as well as knitting, auditions, Tony Award predictions, and other rants.
Click the image for Podcast 24!

Show notes can be found and will be up on the Show Notes Page Tuesday night.

But you’ll have to find it!!

You can find the shownotes HERE…

Just in time for the Opening Night of WVLO’s How To Succeed In Business Without Really Trying!!

This one features a brief interview with Brett Carlson!  Come and see him in “How To Succeed” as the snotty Budd Frump.  www.wvlo.org for tix!!

After over 25 years, I can retire my old sad bagged #vacuum. I splurged on this deal on cyber Monday and now have a gorgeous midnight blue cordless vac. Best of all there is a frickin mop attachment for it!! You bet your bottom I bought 'em!
OMG!!! I am full of nerves!!!! Some family from Nevada will be in the audience tonight!!!! AAAAAARRRHHGGGG!!!
After a day of watching the 4 hour Rock and Roll Hall of Fame Induction Ceremony, I figured I will continue being inspired by #legends today.
Oh it is about to happen!!!!!
YOU GUYS!!!! IT IS #OPENINGNIGHT!!!!
#openingnight🎉 is next week!!! How exciting!!!
Only 2 weeks away from #OpeningNight!!!
I am so happy right now I can't even stand it! 😁😁😁 I am kinda mad at how happy I am. LOL The drive to #rehearsal is going to take forever!😳
Have a #spooky and safe day!!! Unless you don't like spooky, then just have a super fun day.
IT IS #FRIDAY!!!
Good morning, you stunningly beautiful person! Yes, YOU! I hope your weekend was as wonderful as mine.
Happy Monday you beautiful people! I hope your weekend was filled with those you love and the things that make your heart sing. Life is too short to spend it all doing something you don't like.