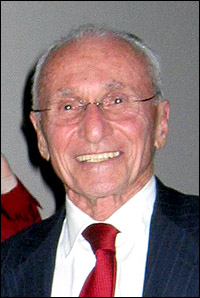 It’s a sad, sad day on Broadway and the in the theatre community.

The Tony Award winning director and writer, the legend Arthur Laurents has passed away at 93 years young at heart.  He died while sleeping.

He is the author of such great works as Gypsy and West Side Story.  In light of his revival of WSS still selling great houses, he is featured in  a magazine interview.  Just over a year ago, Out Magazine had an interview with this amazing man and you can read it HERE.  He is brutally honest, and actually quite funny in that honesty.

I was so happy when his latest production of “Gypsy” took home so many Tony’s especially when it came to the actors.

I was stunned to know that he was as old as he was.  He was incredibly active and was still producing some fantastic work.

In a world that is plagued by hatred and greed and corporations and bad politics, you were able to be yourself for nearly the 100 years you’ve walked the Earth.  You were incredibly blessed that you found love, true love in a time when it was forbidden.  I only hope that I will be able to stay in love for 52 years like you and Mr. Hatcher.  I am so relieved that somewhere in the world two men were able to hold their home together for so long while the world went on.

#itneededtobedone
Finally got out of the house and took a drive down the coast. @wakkosfriend and I took a trip to @arcangeligroceryco and get one of their incredible sammies!!! AHMAHGAH!! SO #delish😋 These little #dioramas are really good. Photos 1 and 3 are just for scale.
OMG!! @wakkosfriend and I are watching @alantudyk kill his new show #residentalien on @syfy. Only halfway in and I love his quirky character. The script is silly and sometimes unexpected sometimes not. It is funny and charming. Oh what a plot twist!!! 😮😮If you like #quirky, highly recommend!!!! #characteractorappreciation #characteractors
made some #blackberryscones... not too shabby!!! #yummy 🥂 oh yeah this was to go with our mimosas! 😂😂😂😂 #brunch #drunching
FINALLY watching the latest #doctorwho. YAY!!!!
hoping to get this video up before 7! Yup. I said video. 🤞🤞
2020 has kicked my 🍑, hurt my ❤, and made me emotionally 🌦. If you need me, I will be inside this #blueberrybucklecoffeecake which is a #firsttimebake. Something good was so needed. Wishing you all a great holiday.
@wakkosfriend and I watched #maraineysblackbottom the other night.
I may be a little too #excited to watch what will probably be a campy one, but I am kinda feeling that RN.
Trying to get into a more festive headspace. Listening to #ellafitzgerald❤️ is always good for the ❤ #afavoriteofmine. This is one of the VEEEERRRRYYYY few #holidayalbums I can listen to and never hate it.
I had some persimmons from imperfect produce so I made cookies. #firsttimecookiemaker
ok. I watched @netflix #theprom. I have mixed opinions. Of course, I will try and express them in a blog post tomorrow once they are organized. I will have to say Murphy used the "circle around the singer shot" a wee bit much IMO. Really like the cast recording!