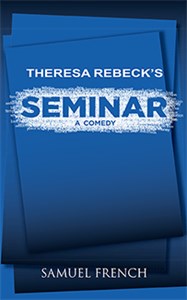 Today I actually had an opportunity to go and watch a show at the Susan Hammer Theater.

Imagine my joy as I finally got to be in a theater but off stage!  So the show for today is “Seminar” by Theresa Rebeck.  What a phenomenal script! Witty, insightful, funny and powerful.

The synopsis: Four aspiring fiction writers (Kate, Martin, Douglas, Izzy) sign up for private classes with a renowned writer/editor (Leonard). They find that this hardened internationally known author isn’t just cruel in his criticisms of their work for pleasure.  Who makes it? Who gives up? Who breaks all the rules to get what they want? Inexperience is exposed to harsh reality.

The setting is a large New York apartment for almost 3/4 of the play.  A couch, two chairs, a cabinet, and a coffee table take up much of the stage while a very little used booze cart I was coveting was upstage right. There were two doorways.  One led to the kitchen and the other to bedrooms and the front door.  I don’t know why that bothered me so much, but logically to me, I don’t know of any homes where the front door would be closer to the bedrooms than the living room. But, Dear Reader, that did not diminish the feel of this set.  It did feel lavish in it’s color and size and textures of furniture. The kitchen was very well dressed even though you didn’t see inside it very much.  My friend, Kevin, would have been impressed.

Lights were pretty simple as it was mostly a single setting, so lights up and lights down. One thing I was curious about was that while it is a single setting there were a lot of blackouts that didn’t need to be as long as they were. But, Dear Reader, as with all reviews, that opinion is merely subjective.

The acting for the most part was good.  The cast called for is small; five people in total (3B, 2G). Because of this, you really get a chance to see what the people can do. This, however, can be a double edge sword.  If there is a nervous habit that one has, this become obvious to me.  There was one show, which I am not naming, that is an amazing show but the lead had a habit and I was ruined for the whole show. That being said, it is a strong cast with stand out performances offered by David Prete (Leonard) and Sarah Hass (Kate).  Prete, a guest artist, commands the stage from every point he lands on.  The moment we first meet Leonard, Prete draws you in. Excellent performance throughout and with two big moments toward the end of the show, it makes me want to add this role to my bucket list for plays! As Kate, Hass performs with the complexity of an old pro. Her delivery is well executed and strong. Kaythi Win (Izzy) and Matthew Kropschot (Douglas) are both likable and offer up great characterization.  One thing I noticed in Win’s  performance that gave me pause was her nearly juvenile portrayal of seduction.  I just didn’t believe this point of her performance.  Izzy is a character that strikes me as someone who has used sex to her advantage many times, so she should be more convincing.  In Kropschot’s performance, my only criticism was that there were some lines that he just seemed to throw away, as in they just faded out. So more projection all the way through the line.  I am sure Rebeck didn’t write some of these lines just to be mumbled. Now, Jacob Soss (Martin) arguably had the most difficult role.  He plays the defensive, insecure author that clearly loves the craft, but is too afraid to be judged by Leonard to offer any writings. Is it the fear of success he is afraid of? Maybe that insecurity is right and he truly is no good at writing? (Another role I am adding to my bucket list!) He is a good looking and likable enough actor, but his delivery of lines felt way too similar.  There wasn’t much variation in his lilt or volume.  He responds as though everything sounded incredulous to him. His hand gestures were almost too much. You know how if you are going to say “I don’t know” with just your hands, you would bring them up so that the elbows bend almost 90 degrees?  He did that for almost every single line.  It wasn’t always both hands.

The direction is probably the toughest thing for me.  I know there are times when it seems too static on stage so someone should move, but the crosses have to make sense.  The actors have to have a reason for the move, and several times they did not.  To me, that stuck out like a sore thumb. So there was that but also why not try and pull out that seduction level from the Izzy character? Don’t get me wrong, this is a solid show with great pacing and lasts just past the 2 hour mark but I just thought it could be tweaked a little bit.

Oh, Gentle Reader, who is your favorite fiction writer? Is it a man or a woman?  Have you never given this a thought? There is a moment in the script that does make you ponder on the difference in how women are respected in this genre of writing than men.

Let me know in the comments below, your thoughts. Maybe you saw the show and disagree with what I saw.  Let me know that too.

so glad @wakkosfriend and I made it to the closing weekend of "There's Something Funny Going on Here"
I loved the #stagedversion so I am hoping this is just as good.
Had a great day with #brunch, a nap, now a #scarymovie! Yay! Ok, #malignantmovie show me what you got!
Ok CA!!! Did you #vote yet?
My boss sent this gorgeous #frenchpress a couple of weeks ago but I decided to try it out today. It seems simple enough, but even as I followed the directions, #ithinkididsomethingwrong🤣 cuz it tastes like blech!! It is like coffee tea. I put in 8 teaspoons of course ground beans in the can (1 tsp per 4oz H2o) added 32 oz water let steep for 10 minutes not just 4. 🤮🤮🤮
Finally!! Let's see how this goes...
@treadstone isn't usually the type of show that I would watch, ( usually it is all thins #horror or #Marvel or #comedy) but I had caught the first episode and DVR'd them. Finally began to catch up on them. I am blown away by how frickin' good this storytelling is. These characters are so complex and engaging. Really REALLY well done!! I got so invested in these characters ia was REALLY bummed when... well I don't wanna give anything away if you decide to watch it.
I thought I had seen #georgearomero's #diaryofthedead before but I only recalled 1 scene. I wasnt expecting some of those scares 🤣🤣🤣 #horrormovies #scaryflixaremyjam
Continuing with the #georgearomero #zombieseries
LOL!! I can't even with this nonsense!🤣🤣🤣
With the new #candyman movie coming to cinemas on Friday, I wanted to rewatch the original #flick to recall the plot. I wasn't fan when it first came out because it was supposed to be a horror movie. Problem is, it isn't scary. It still isn't. I think that version should be classified as a thriller/mystery. Yes there was some blood, but it was no more than a mob movie.
#lamenting whilst #frogging my #wip