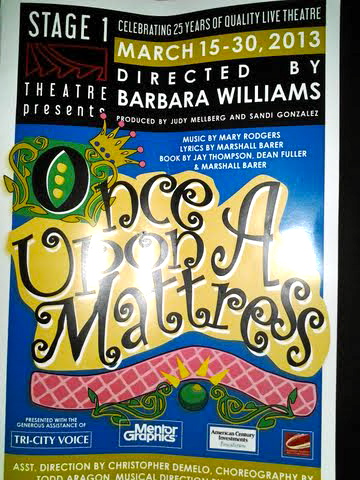 I don’t know if anyone did funny medieval better than Monte Python but, Stage 1 Theatre in Newark is offering up a very funny version of Once Upon A Mattress.

It’s a royally funny tale of an overbearing queen trying to keep the prince from marrying anything other than a “true princess” and the most unlikely of princesses who comes from the swamps to win his hand.

The first time I heard the cast recording, I have to confess, I did not like it.  But then I figured I was being unfair and should maybe watch it to see if I like the show better if I knew the script and the songs.  Alas, watching didn’t help.  I left thinking that I would never watch this show again, let alone listen to it.

Then I find out a dear friend is in the show at Stage 1.  I have been trying to get out to see my friends perform some more.  Not only that, I can check out this theatre and see what the drive is like since someday, I would like to audition for Stage 1.  Luckily, several of my fellow Sugar Babies went as well.

I thought I was lost and pulled into a parking lot and I stopped a couple to ask if I was in the right area.  Oddly, it was Carissa De Mesa (she’s got an amazing photography book by the way), whom I haven’t seen since we did West Side Story years ago, and as it turns out, I was in the right place!  With 8 minutes to spare, I purchased my ticket and found my seat.  The theatre is very nice.  The seats are pretty comfortable, the stage is a standard proscenium, and the orchestra is set up directly in front of the stage.  I wish I was able to take a tour of the backstage area.  I wonder what the wing and fly space is like.

Now for the show itself.  Carissa pointed out that according to the program, the 21st wasn’t a scheduled performance so I don’t know if tonight was a brush up or if was an after thought performance.  I have to wonder if tonight was a little looser because of this.  Would the weekend shows be as free as this performance?

I am still not a fan of the story itself, but the life that these actors put into the show made me like it better than I had.  And I had completely written off the show.

I was immediately impressed.  The orchestra conducted by Ken Nadler was fabulous! They didn’t overpower the actors and they were so clean.  It reminded me of a Dan Singletary orchestra, and that guy is AWESOME!  Then a minstrel enters and sets up the show for us. Barry Bailey’s singing was outstanding.  His voice was clear, strong, and perfectly understandable.  As we begin to meet the characters, the stage is filled with so many funny bits and moments that I don’t know if I caught them all.  Brandon Fouch as Prince Dauntless was goofy but absolutely endearing.  You can’t help but to cheer for him. Princess Winnifred, Christi Marie Wallace, is a beast!! Her comedic timing is flawless.  She has got some pipes on her, too! My favorite song was “Happily Ever After.” Sven Shutz and Jennifer Gregoire as Sir Harry and Lady Larkin were hilarious whether in lovey-dovey moments or when having a tiff.  Great chemistry between those two.

This show is over the top as far as the story goes IMHO, but the cast rose to the challenge and brought forth many laughs from the audience. If you have already seen WVLO’s production of Sugar, then I highly recommend you continue the laughter with Stage 1’s Once Upon A Mattress.   The show runs weekends until the end of the March (no show on Easter).  Click on the links to get tickets to either show.

Congrats to the cast for a very funny show.  Nice work.