Where that saying is actually originated from, I am not sure.  An internet search yielded only “Act your age, not your shoe size” or “Act your age, not your IQ” and I am sure that the title is merely a derivative of one or the other.  In any case, I wanted to talk a little bit about playing a role that you feel you are the proper age for.

Since the industry is driven often by youth, then of course it only makes sense to want to look younger than you actually are.

But what happens to those chances that come by where you don’t look physically age appropriate?  Sadly, more often than not, the role will go to someone else.

I’ve been wanting to play a role that’s more mature and down to earth for a while now.  So far, the closest that I have gotten is Mr. Bratt in H2$.  In mannerisms and attitude, I got to play the role more maturely, but when I look at pictures, I still feel like I look too young.  After the show ended, I wanted to know what it would be like to look older.  SOOOO….. 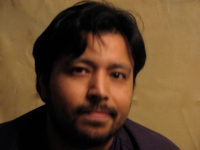 I grew out a beard to see if that helped.  And it did.  A little.  Now, I looked like I just was too lazy to shave and not necessarily older.  But I kept growing out the beard from Dec 5 all the way through to today.  It was so itchy, and I don’t know how many times I cursed myself for not cutting it off, but I stood my ground.  Until finally it became too much and I just couldn’t do it any longer.  I didn’t really learn anything new about myself with this little test, but now I know what I look like “Rugged.”  Hahaha.  But I must shave…

I began looking and feeling like myself, but I didn’t want the same thing as before, so I couldn’t figure out how to change it up.  I finally settled on…

How does this tie in with acting your age?  Well, when I finally am able to play a character that is more than a juvenile minded comedic relief man-child, then I will be “acting my age.”  I am truly happy, that I can pull that type of role off, but I long to have a chance to really forage deep in my psyche and actually be able to create something with so much more depth than I have ever done before.  While I try to have a nice multilayered character in every show, having a complex role would allow me to play even more inside the mind and history of a character without having to completely imagine an entire life and hope that it’s right.

However in real life, I happily embrace my Peter Pan Syndrome and shall fight till the death to keep looking for my shadow.

Are you older or younger than you really are?  Do you like it or loath it?  Let me know by simply stating : “younger, like it” in the comment section below.

OMG!!! I am full of nerves!!!! Some family from Nevada will be in the audience tonight!!!! AAAAAARRRHHGGGG!!!
After a day of watching the 4 hour Rock and Roll Hall of Fame Induction Ceremony, I figured I will continue being inspired by #legends today.
Oh it is about to happen!!!!!
YOU GUYS!!!! IT IS #OPENINGNIGHT!!!!
#openingnight🎉 is next week!!! How exciting!!!
Only 2 weeks away from #OpeningNight!!!
I am so happy right now I can't even stand it! 😁😁😁 I am kinda mad at how happy I am. LOL The drive to #rehearsal is going to take forever!😳
Have a #spooky and safe day!!! Unless you don't like spooky, then just have a super fun day.
IT IS #FRIDAY!!!
Good morning, you stunningly beautiful person! Yes, YOU! I hope your weekend was as wonderful as mine.
Happy Monday you beautiful people! I hope your weekend was filled with those you love and the things that make your heart sing. Life is too short to spend it all doing something you don't like.
Celebrating Friday night by watching 2 Icons!!