Weeellllllll, that’s a whole other story! 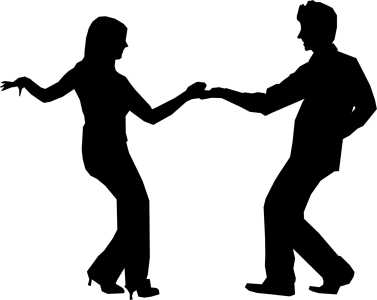 I have always wanted to take swing dancing lessons.  If I could pick a time to live in other than this one, the Swing Era would have totally been my bag!  All these amazing dances to shake a leg to? Not to mention the kick ass music as well.  Way, way better than most of what’s out there today.

It turns out that I get to dance a couple of 8 counts with the wonderful Laura Benitez.  We got to work on a little sumpin’ sumpin’ during today’s rehearsal.  Laura taught me some of the basics of swing and we tried to work on a routine that would be appropriate for the scene.  Okay, so the scene is as follows: It’s near the end of Act 1 and Ultima and Tony are trying to save his Uncle Lucas.  Lucas had a curse placed on him, and in order to save him, Tony’s spirit goes to a place that’s supposed to be purgatory.  While in purgartory, Tony sees his brother, Andrew (Me)  and I am dancing with a prostitute who hopefully will have a death mask on or will be represented as another form of El Muerte.  At first we’re a little slinky, but when I see her for what she is, I beg to be saved.  During our dance, I have a conversation with Tony and I try to escape from her grasp.  Do I get away?  You’ll have to see the show to find out.  And we are just one little piece of this scene.

For tonight’s rehearsal, we had no music to work with, so we are kind of anxious about the song selection.  It’s still unclear what we’ll be dancing to.  In addition to that small problem, our Tony wasn’t in attendance tonight, so we couldn’t really set the dialogue to the routine either.

I have to admit it was quite the challenge to perform a new routine and deliver lines in a one sided conversation at the same time.  After running the scene, Laura and I went to work in the hallways to try and solidify what we’ve got so far.  I give it two thumbs up! This scene is going to be pretty intense if we pull it off.

One thought on “You want me to what? Piece of cake! Oh, at the same time!”