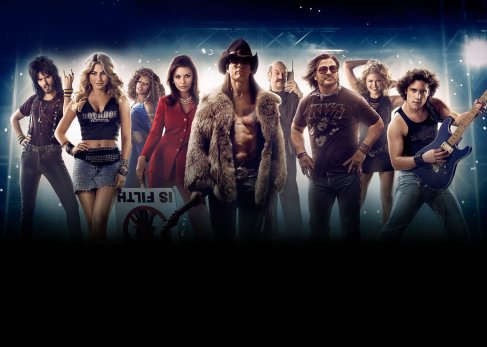 And rock and roll is so much fun when you see it in the context of “Rock of Ages!”

The story revolves around Sherrie Christian (Julianne Hough) who heads to 1980’s Hollywood to make it as a singer.  Right off the bat, there’s some laughing to be done as the first verse and chorus of Night Ranger’s “Sister Christian”  plays out.  And that’s when you realize this movie while it’s intended to simply have you enjoy yourself, is really well thought out in terms of splitting the songs into believable-ish dialogue.

Her first night there, she meets Drew (the cute as a button Diego Boneta) and quickly falls in love.  As “luck” would have it, she begins to work at The Bourbon Room, a seedy rock and roll bar on the main drag owned by Dennis and Lonny (Alec Baldwin and Russell Brand.)  The Bourbon Room is the place that gave Stacee Jaxx (Tom Cruise) his big break and shot him into Rock God status.

Then, enter Mayor Whitmore (Bryan Cranston) and his wife Patricia (Catherine Zeta-Jones) who vow to rid the town of such evil music and “morals”  by shutting down The Bourbon Room.

We watch the kids fall in and out of love.  We see the icon question the emptiness of his fame.  We follow the club owners as they realize that rock is as much a part of them as they are of each other.

I don’t know if this movie would have worked if it was cast any other way.  Everyone sounded great.  Every time I would roll my eyes because Hough’s voice is so annoyingly mousey, she would sing out those rock high notes and it would sound fabulous.  Boneta was perfection! Of course, I was expecting MJB to be amazing and she didn’t dissapoint.   Brand, who I am not a fan of at all, was surprisingly unannoying and actually had a decent voice!  I honestly enjoyed his performance.  I was curious to see how Baldwin and Cruise would fare.  And I didn’t have high hopes for them (but only because I don’t recall either of them singing.) and I was praying they wouldn’t be as bad as Pierce Brosnan in Mamma Mia.  Which by the way, if I ever see him, I am gonna punch him down his face for that role.  It was awful, just awful!

Anyway… as Dennis, owner of The Bourbon Room, Alec Baldwin is a hoot and a holler.  He reminds me of a rock and roll hippy.  He’s kinda laid back and goofy, but those eyes of his sparkle with edge.  His singing actually seems to mimic his demeanor as well.  Odd choice of words I know.   When he sings, none of the songs really give him a big belting note, so he never displays power.  He carries the tune great, but doesn’t give it any “guts” which is what I mean by laid back.  Yet the natural raspy quality of his voice gives it an edge.

But enough about Mr. Baldwin.  What really mesmerized me in this movie was Cruise’s performance as Jaxx.  I couldn’t stop smiling with how phenomenal he is in this flick!  While he doesn’t have the best voice (it’s kind of thin when he sings the ballads) its good enough to make the songs listen-worthy, but when you see him rocking out… its frackin’ amazing.  He really truly was a rock star.  There is a scene when he’s to be interviewed for Rolling Stone by reporter Constance Sack (Malin Akerman) and where he’s woken from his nap but behind his sunglasses, his eyes are sharp as a tack.  Every movement reads as exhausted drunk middle aged man struggling to get it together, but his eyes read “I am King in my element.”  I watched closely when he sang his songs and his breathing and energy behind the words matched from soundtrack to video.  It was almost like he was actually singing on the set instead of lip syncing.  There are a few times where other characters miss a breath here or there, but not Cruise.

While he may not be the main character of the movie, Cruise is so outstanding that you think he is.

There are some incredible mash-ups like “We Built This City/ We’re Not Gonna Take It” and “Jukebox Hero/I Love Rock and Roll.”  For me, the highlights of the movie are Zeta-Jones’ “Hit Me With Your Best Shot” (Mia Michaels’ choreography is always fabulous, but her wink to 80’s vids like “Beat It” make it funny too), Cruise’s “Pour Some Sugar On Me” “Wanted Dead or Alive” and “I Wanna Know What Love Is” with Akerman, and Blige’s “Any Way You Want It.”

While this movie may have opened with low box office numbers, don’t get the idea that it was because it was a bad movie.  This was made to cater to the theatre lovers and the people of the eighties who loved all those pop rock hair band songs.  It’s a small group of us.  However, if you like a good comedy, if you like 80’s music, if you like cheesy romantics, if you like campy, then this is a wonderful movie to see.

In a way this movie is kind of like a time capsule.  It’s got a bunch of music from the 80’s but also some other things that aren’t so easy to find anymore.  I mean when’s the last time you saw a Tower Records?   Or records in general?

Its too much fun to be missed.

If you don’t have a good time, you can complain to me in the comments section.  How does that sound? Now, go get to the theater!

5 big happy actors for this film.

One thought on “♫♪ I Love Rock and Roll…♩♬”

I have always loved the topic of #aliens👽 and #UFO's. oh wait, forgive me, I meant #UAP's. (It is just a formal way of saying UFO.) It was really amazing to see videos of the actual first people to touch the "Roswell" crash talking about being silenced about the event and saying what they really saw.
Review for #LovePeopleUseThingsBook is up on the website! Link in bio
So as I broke down the #nectarmattress box, I noticed this on the bottom. I love a company that has a sense of humor! #nicebottom #compliments. 😂😂
Finally got the new #mattress set up. I didn't realize how dense it is and tried flopping on it like a regular mattress. It was like bellyflopping in a pool #Ouch! 🤣 That being said, I did get some supportive rest. I just wonder how long it will be before the middle sinks in... #nectarmattress
Watched #thetomorrowwar! it was pretty intense. Man, the designer of the creatures made some messed up looking creatures. Loved the design of the time jump tunnel. Nice job @prattprattpratt! Still looking good. LOL. And when did JK Simmons get jacked?!
My nephew @mattattack2757 wanted to go to the #kissminigolfcourse in the #riohotel. Had a blast! And when the super fun staff announces your birthday and give you a cute lil hat to wear, one must choose the one which coordinates with one's outfit. LOL.
It is really hard to tell, but this moon was massive and just coming gup over the horizon on the #roadtrip to #LasVegas last night. It was 😍😍 and I really wished if I drove faster I would catch it.
This is just #truefacts.
Well if @burgerking is gonna support the #lgbtqiacommunity 🌈 with this sandwich, then I shall support the #ch'king!
IN THE HEIGHTS!!!!!!!! Can't wait to see this. Hopefully it is as great as the stage production. #intheheightsmovie #hbomax
As someone who has a very hard time focusing when left to my own devices, this got me curious about decluttering my brain and life. Really looking forward to tackling this book over the weekend. Thanks @celadonbooks!!
Yay!!! it's #movienight!!! Man, that first scene was #intense! You know when the scares are coming, but the anticipation of the reveals linger just slightly longer than one expects.... then BAM! There's that li'l hit of #scared😱❤️ that I have been waiting for. LOL.