Tuesday night/Wednesday morning, I was woken up at 3:30 in the morning by a weird whirring sound and the soft purring of an idling engine.  I wasn’t sure what the hell was happening outside, but it didn’t sound “normal.”   So I lay in bed with this dilemma:  Do I dare look outside to see what is making that noise?

Hold on, what was that flash of light?  What IS going on out there?

So after a couple of deep breaths to build up my resolve, I sat up and looked around the room and scooted to over to the window and slowly slid the blind to the side.  The window was foggy and I could make out a truck that was had it’s lights out but the engine running.   The robotic whirring began again with the sporadic flashes , and at first I thought “Shit, it’s the Singularity!”  As it turns out, after I wiped some of the fog off the window and moved to a better position, I saw that it was a Comcast marked truck with a bucket lift and some dude was working on the power lines that are attached to a street light.

I had to get a better look but I still couldn’t see what he was doing. Being the paranoid fellow that I am, I began to wonder why there would be someone doing this at 3:30 in the morning.  It just didn’t make sense to me, and it still doesn’t.  So then I figure, I am going to get my camera so that way I have documented proof that this was happening and I wasn’t going mad.  But then I began to think that if I get caught taking pictures, would I come home and find my place ransacked or something.

Still, I grab my good ol’ picture snapper and sneak into the second room to try and get a better look.  So I get the pic above taken and I don’t know if the guy sees the little green light go off, but the basket starts to come down, so I try to duck behind the blinds before he sees me.  Then the basket starts to make a higher pitch noise, and I am guessing that it was moving back up so I poke my head out once more and get: 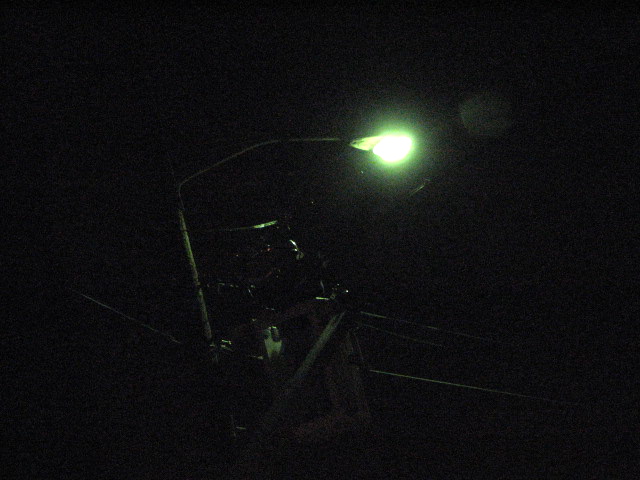 After taking these pictures, I tried to post them on Facebook to see if anyone else thought this whole thing was weird and guess what? There was no internet signal.  So I grabbed my cell and posted via mobile and the people that responded all agreed that this was highly suspicious indeed.  So I contacted Comcast via chat and:   (Yes, I used a fake name, shut up, gawd!)

DelfinYCBU: Hello Jason, Thank you for contacting Comcast Live Chat Support. My name is Delfin JR. Please give me one moment to review your information.

DelfinYCBU: Welcome to Comcast! I hope your day is going well. How may I help you?

Jason: I really just have a question.

DelfinYCBU: May I know what about please ?

Jason: Tuesday night/ Wednesday morning at 3:30, I was woken up by a truck in the driveway working on one of the wires by a street light. Is this normal?

Jason: There wasn’t a power outage, and to my knowledge the internet connection was fine before I went to sleep, so I find it kind of alarming.

DelfinYCBU: Have you checked on the truck if its familiar or a Comcast service truck ?

DelfinYCBU: I am not sure if it was ours but yes there are instances that we send out personnel on areas that could have been affected by an outage.

Jason: Yes, the truck said Comcast on the driver’s side door. It also had a bucket lift to reach the wires

DelfinYCBU: I see. Most probably there isa problem on the post wire. Could be someone or another customer in your neighborhood.

DelfinYCBU: My apologies, I mean the wires on the street post.

Jason: Also, I don’t want to be rude, but do you know if there was a work order for that?

DelfinYCBU: My apologies Jason but I wont be able to track that here on my end. I’d advise instead to contact the Local Office to trace.

Jason: Oh, well, thank you for all your help Delfin. I appreciate it. Have a good evening.

DelfinYCBU: You are most welcome, Jason.

DelfinYCBU: I appreciate your time and patience with me too.

This little chat took a while to get through.  In my head, I can just see some poor guy halfway around the world stressing because some regular Joe is asking questions about a suspicious late night patch job.  So I guess Saturday I will have to go into our local “branch” and see if they could tell me what’s happening.

Here’s my concern: With all these big government agencies scanning all the millions and millions emails and listening in on phone conversations, thanks to the Pat Act, what if this is just another attempt at monitoring everything?  With Comcast being the huge monopoly it is in this neighborhood and many others whose to say that Comcast itself isn’t in league with Big Brother for special favors?  Comcast not only owns a large chunk of the telecommunications sector but now also Media thanks to it’s little “joint venture” with General Electric.  I will never understand how the FCC or whoever sanctioned this massive agreement.  “Special Favors” perhaps?  Maybe this will be an attempt to even further restrict our bandwidth?  There’s so many questions to ask that it makes my head spin.

Take look at your power lines.  Have you ever paid them any attention?  I think we should my friends, I think it’s high time we should.

2 thoughts on “♬ Not last night, but the night before ♪”

OMG!!! I am full of nerves!!!! Some family from Nevada will be in the audience tonight!!!! AAAAAARRRHHGGGG!!!
After a day of watching the 4 hour Rock and Roll Hall of Fame Induction Ceremony, I figured I will continue being inspired by #legends today.
Oh it is about to happen!!!!!
YOU GUYS!!!! IT IS #OPENINGNIGHT!!!!
#openingnight🎉 is next week!!! How exciting!!!
Only 2 weeks away from #OpeningNight!!!
I am so happy right now I can't even stand it! 😁😁😁 I am kinda mad at how happy I am. LOL The drive to #rehearsal is going to take forever!😳
Have a #spooky and safe day!!! Unless you don't like spooky, then just have a super fun day.
IT IS #FRIDAY!!!
Good morning, you stunningly beautiful person! Yes, YOU! I hope your weekend was as wonderful as mine.
Happy Monday you beautiful people! I hope your weekend was filled with those you love and the things that make your heart sing. Life is too short to spend it all doing something you don't like.
Celebrating Friday night by watching 2 Icons!!